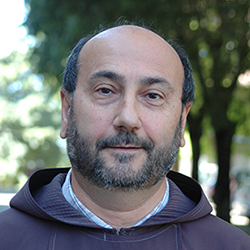 Friar Dino Dozzi is a Capuchin priest, professor and doctor of biblical sciences (PIB). He currently lives in Imola and directs the magazine “Messaggero Cappuccino”. He teaches New Testament at ISSR “S. Apollinaris” in Forlì, of which he was director until 2014. He takes part to the preparation of “Parola Spirito e Vita”and is responsible for the conferences group of the Franciscan Festival. By word and writings is engaged in the dissemination of the Biblical and Franciscan message.