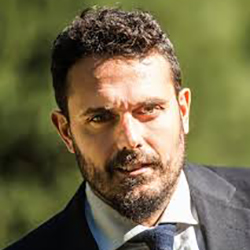 Born thirty-eight years ago in Rome, he has been married for ten with Anna Chiara and has four children: Giovanni, Therese, Maddalena and Gabriele.

He has extensive experience in the Catholic world: in Rome, but also in the missions (South Africa, Ethiopia, Mozambique and Tanzania), and in the Camino de Santiago. He played several years of volunteer work in the parish and run the info-point of the XV World Youth Day in 2000.

As a journalist, he has worked with Avvenire, Romasette, Vite, Popoli e Missione. He wrote several publications: “Per un brivido tutto da vivere” with Queriniana, with Effatà: “I sogni dei giovani” and with Città Nuova, together with his wife, “La fantasia di Dio“. He was also editor of the texts for some photographic exhibitions, such as “Family Days”.

In 2005 he became President of the Provincial ACLI of Rome, the Consulta of lay aggregation of the Diocese of Rome and of the Diocesan Pastoral Council. Since 2006, he is President of the Association Scienza & Vita Roma 1 and since 2009 President of the Forum of Family Associations in Lazio. In these years he manages some innovative projects: the “Punto Famiglia“; “ Granelli di Senapa“, a training course dedicated to young couples; or the fair trade buying and family groups. But also the “Centro Culturale GP II“.

On October 4, 2014 with the families of Rome he launches #iostoconipasseggini, filling the Capitol square in empty strollers and winning a major battle against the City for the increase in rates of nurseries.

In August of 2015 he resigned as a commissioner to run for the Presidency of the National Forum of Family Associations.

On November 28, 2015 he was elected President of the National Forum of the Families.