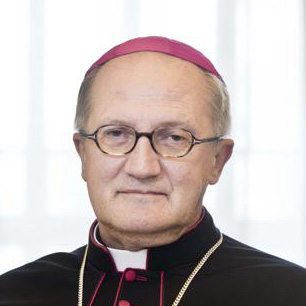 Enrico dal Covolo was born in Belluno on October 5, 1950. He professed his first vows on September 2, 1973. He graduated in Classical Literature at the Catholic University of Sacred Heart in Milan, he improved his studies in the Department of Religious Studies of the same university. Ordained a priest on December 22, 1979 in the Basilica of St. Ambrose of Milan, he obtained a PhD in Theology and Patristic Science at the Augustinianum Patristic Institute in Rome.

After exercising the ministry as a priest in Chiari and in Milan, in 1986 he became professor of Ancient Greek Christian Literature in the Faculty of Christian and Classical Literature at the Salesian Pontifical University in Rome; from 1993 to2000 he was dean of the same faculty.

From 2000 to 2003, he was vice-rector of the Salesian Pontifical University in Rome, taking care of foreign relations, related centers and Salesianum magazine. In 2003 he was appointed general postulator for the causes of saints of the Salesian family.

From 21 to 27 February 2010 he preached the Lenten spiritual exercises to Pope Benedict XVI and the Roman Curia in the Redemptoris Mater chapel, choosing the priestly vocation as subject of the meditations. On June 30 of the same year, Pope Benedict 16th appointed him Rector of the Pontifical Lateran University and on September 15 he elevated Mgr.Dal Covolo to the episcopal dignity, assigning him the titular see of Eraclea. Four years later, Pope Francis has confirmed him rector of the Pontifical Lateran University for four more years.