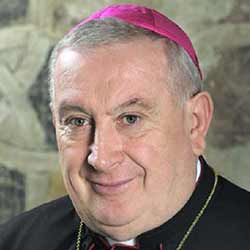 Franco Giulio Brambilla was born in Missaglia (LC) in 1949. Ordained a priest in 1975, he completed his studies at the Pontifical Gregorian University in Rome, obtaining first the license (1977) and then earning his degree in 1985 with a thesis on the Christology by Schillebeeckx. Until 1985 he taught Sacred Scripture, Spiritual Theology and Theological Anthropology in Seveso Seminar. He taught Christology and Theological Anthropology in the seat of the Seminary in Venegono Inf. (Va). He was Vice-director of the same section of the Seminary from 1986 to 1993 and then Director from 1993 to 2003.

He then became Director of Institutional Cycle of the Faculty of Theology until 2006. He was professor of Christology and Theological Anthropology at the Theological Faculty of Northern Italy and Dean of the Faculty from 2006 to 2012. Since 2007 he has been auxiliary bishop of Milan and vicar for Culture of the same Diocese.

On November 24, 2011 he was appointed Bishop of Novara and made entry into the Diocese on February 5, 2012. He was a member of the Episcopal Commission for the Doctrine of the Faith and Catechesis of the CEI (until 2015) and Chairman of the Committee for Superior Studies of Theology and Religious Studies (until 2014).

In 2015 he was elected Vice President of the CEI for the North and appointed among the members of the Ordinary Synod on the Family in October 2015.