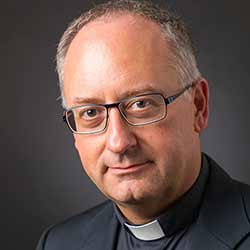 Antonio Spadaro, born in Messina (Italy) in 1966, is a Jesuit and, since 2011, editor of “La Civiltà Cattolica”, for which he has published about 200 papers. He also collaborated with other Italian and foreign magazines. He graduated in Philosophy at the University of Messina in 1988 and in 2000 he defended a doctorate in Theology at the Pontifical Gregorian University, where he taught as a visiting professor at the Faculty of Theology and the Interdisciplinary Center for Social Communication (CiCS). From 2004 to 2009 he was Managing Director for cultural and intellectual activities of the Italian Jesuits. Since 2011 he is a consultor of the Pontifical Council for Culture and he was consultor of the Pontifical Council for Social Communications until its closure. He has been then member of the Vatican Media Committee. He is ecclesiastical adviser of the Union of Italian Catholic Publishers and Booksellers (Uelci). He has published several volumes of literary criticism and theology in dialogue with contemporary culture, especially digital culture. He published as an author about 30 books, including La grazia della Parola. Karl Rahner e la poesia (Milan 2006) and Abitare la possibilità. L’esperienza della letteratura, (Milan 2008), Svolta di respiro. Spiritualità della vita contemporanea (Milan 2010), Nelle vene d’America. Da Walt Whitman a Jack Kerouac (Milan 2013), Cybertheology: Thinking Christianity in the Era of the Internet (Milan 2012) translated in 8 languages. He is the author of the first book of conversation with Pope Francis: My Door Is Always Open: A Conversation on Faith, Hope and the Church in a Time of Change (Milan 2013) who had international diffusion. He then edited the edition of an interview between the Pope and the children of the world (Dear Pope Francis: The Pope Answers Letters from Children Around the World, Milan 2015). He also edited the Italian edition of the homilies of Santa Marta, the main papal documents (Evangelii Gaudium, Laudato Si’ and Amoris Laetitia), the texts of the two Synods on the family, in which he participated as a member appointed by the Pope. He also collected and edited all the talk and the messages by J.M. Bergoglio Jesuit (Nel cuore di ogni padre, Milan 2014) and at the time he was archbishop of Buenos Aires (Nei tuoi occhi è la mia parola, Milan 2016).