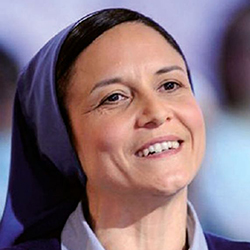 Sister Anna Nobili was born in Milan in 1970 and began her studies of Modern Jazz and Classic Dance-at S.P.I.D. Dance Academy in Milan in 1988.

In 1993 she continued training with the teacher Virgilio Pitzalis.

In 1992 she started as a teacher in some schools, including the DanzAlessandria Academy directed by Patrizia Campassi, dancer of the Scala. Whit Campassi’s Academy she will dance in several events.

In 1993, following the ”overwhelming encounter with the person of Jesus Christ, the Son of God”, begins a journey that will take her to choose to leave the world of the show to devote herself exclusively to the teaching of funky-jazz dance and research of the true sense of the dance. In 1993 she matured the choice of taking the vows in the Congregation of Worker Sisters of the Holy House of Nazareth.

She left with joy even the teaching of dance, but she resumed it in 2008 by the will of the sisters, studying modern-contemporary dance and classical dance with Alessandra Angiolani in study76 of Brescia and becoming a choreographer of the musical ” Uno di Noi, un santo di nome Don Arcangelo Tadini”.

Since that moment, Sister Anna resumed her activities as a dancer and choreographer.

She continued her studies at the I.A.L.S. in Rome with prominent masters-choreographers: Modern dance with Mauro Mosconi, Hip hop with Simone Ginanneschi, Ballet with Giancarlo Stiscia and Mariella Castelli, 2006-2012 Dance Fusion (classic and modern) with Stefano Vagnoli.

She danced in the contemporary dance company of Andrea Cagnetti.

In 2007 she joined the Compagnia della Speranza of Stefano Vagnoli, starting a dance and life path that will lead them to create the “Motivi” recital (about the meaning of life and the value of hope).

In 2007, following the request of the Bishop Domenico Sigalini, Sister Anna opened in Palestrina (RM) her own Christian Dance Course. The rapid increase of students and courses with the originality of their names: ModernSpirit, HipHope, Break Inside , SweetDance is significant. In a very short time the Christian Dance School, the Holy Dance, was born, directed by her.

She created, in collaboration with the students, several shows, traveling in Italian squares and theaters.

In 2011 she founded the Agape Fellowship open to welcome all Christian professionals dancers who wish to give praise to God, dancing.

In 2009, speaking on “Mattino5” (Channel 5) she had the opportunity to tell, even in words, that the Dance is Life, is an expression of the whole person, in relation with herself, with others, with God.